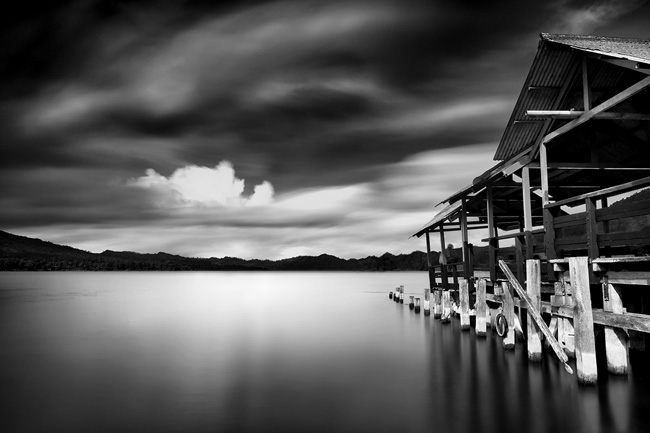 The story behind the photograph

When we arrived here, at first I thought I would not be able to make this shot. This wharf was interesting for shooting from the left side, where the whole shore was full of fishing boats tight to the shore with ropes. I pulled out the tripod anyway, I set it up and waited for the situation to change. After 15 minutes, I was lucky and two of the fishermen took off to the see to fish. I should say that it is necessary to have good luck but at the same time you have to be ready. I had enough time to make only two long exposures, where I tried two times of different duration. After that, two other fishermen appeared and the scene was ruined, so there was just a little missing and this photo would not be taken at all. When you’re taking long exposures, you always have to experiment, it is not a rule that a 4 minute exposure should be always suitable. The weather conditions keep changing constantly and you have to adopt to them. When you’re taking pictures on a place where you might never get back again, it would be a real shame, if you brought home a useless shot just because you didn’t feel like experimenting and relied on the fact that the photo seemed quite well-done on the LCD screen of you camera but when you look at it on your computer at home, the reality can be completely different.

I usually make 3-4 different shots of the same composition with different exposures and then choose the one I like best and meets my idea. However, I regularly take several shots with the same exposure time because the density of clouds can also change quite often and that can have a significant impact on the final effect. It is always true that in order to take a good photograph, it is essential to have it exposed correctly, which is why you need to control your histogram all the time.

Luckily, for all long exposure fans smart phones applications are also available today, they easily calculate the required time for you. And finally, my last piece of advice for long exposures: when taking long exposure shots, always cover the viewfinder, the light gets inside and there might appear some artefacts on the photograph which later cannot be  removed in the post-process. Originally, I thought I would cut off the photograph into a square but I decided to stick to the 2:3 size. I always make my first adjustments with Adobe Photoshop Lightroom, where I slightly adjust the contrast, I cut off the photograph, add a little bit of clarity and I convert the photograph into the TIFF format, 16bit, 300 pixels.

I use the program Nik Software Silver Efex Pro2 for convertions into BW. I believe, it is one of the best into black and white conversions. As soon as you get familiar with it, you will not ask for anything else. After having converted the photos into BW, I finialize them in Adobe Photoshop, where I use dodging and burning a lot, levels, curves to achieve the desired result.  The key is to do everything slowly and carefully without any hurry. Otherwise, as a result you can get a  photograph bungled by the post process.